Since ancient times, the skins of animals have been used in various needs of human life. The first inhabitants of the world as we know wore fur to protect against cold and bad weather, already making it wearable. However, only thousands of years late the skins of animals that were domesticated (such as goats, sheep and calves) were being used for writing purposes.

Parchment (from the Greek word pergaméne and Latin  pergamin or pergamene) is the name given to an animal skin, usually goat, mutton, lamb or sheep and calf, prepared with the intention to have somewhere to write. Its name recalls the city of Pergamon in Minor Asia, where it is believed to have originated. 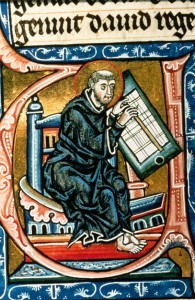 Some historians even claim that was around the Third Century – AC that the parchment had really marked its presence in history. And they said, this was driven by disagreements occurred between the King of Pergamon, Eumenes II (196-158 BC) and Pharaoh of Egypt, Ptolemy V, that caused the shortage of Papyrus, the base material made of vegetable fibers, which then prevailed.

Libraries of “parchments” were kept in Christian monasteries, where educated monks dedicated themselves to copy ancient manuscripts, and with this activity they guaranteed monastic survival and dissemination of classical texts of Greek and Latin culture in the West, especially the time of the Byzantine Empire.

Since then, the parchment has been growing exponentially in use, and reaching its apex in the middle of the Middle Age, until the emergence of the paper and then the press. Still, over the years, the parchment was still used in particular areas such as public documents issued by kings, emperors and popes.

Despite the use in the writing “industry”, parchment was also being used in the manufacture of percussion instruments, lamps and screens for paintings, and then it gained its space with the manufacture of diplomas and certificates, binding and restoration, special invitations, reproduction of historical documents, etc..

Over the centuries there were some changes in the original process in the parchment manufacture. Although more recently some mechanical devices are used (in the strip and the withdrawal of the hairs), and modified the use of some inputs, the parchment is still a strong product in the handcraft area, respecting the older techniques, depending on the purpose of the final product : bookbinding and restoration, writing material, decorative objects, etc..

In summary, despite being a product of ancient history, parchment, today, assumes a particular characteristic because, given the mass consumption, it is offering architects and designers the opportunity to give dignity to products sector and especially in furniture and interior decoration, whether for offices, homes or hotels and yachts.