With more than fifteen years in the leather industry, Brazil Parchment Couros e Peles Ltda gave its first steps in the city of Piúma – ES, Brazil, becoming the leader and pioneer in manufacturing and supplying legitimate parchment from diverse animals skins.

The short story from the company doesn’t reflect in its awareness of the importance that this form of art has in the Americas, in the importance of our products quality and in the company commitment in rescuing and keeping alive (partially) the ancient culture of parchment.

Throughout its existence, Brazil Parchment has worked hard for its production fits the needs of modern control on the environmental impact with its production. Besides using only skins resulting from use of the slaughter of farm animals (goat, sheep and calves), the inputs used are not harmful to the environment (classified as bio-degradable). 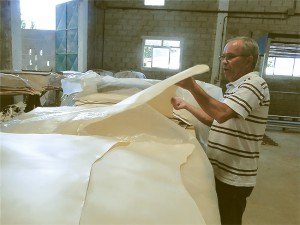 Initially, the company focused its production exclusively to the Brazilian market, specialized in printing university diplomas, certificates and honorary titles. A sector which we become established permanently, not only by the quality of our product, but primarily because of the lack of parchment companies in the leather business.

As the company consolidated in the parchment production, we started to manufacture parchments focusing in the external market. 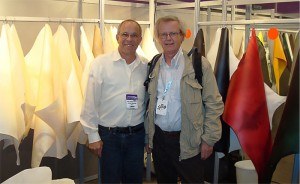 Only after the Mr. Z. Henk de Groot interest (dutch, historian and an enthusiast of parchment made in the Middle Age (– see www.dedas.nl), that became our principal adviser and distributor in Europe), was that the company started to introduce procedures which enabled it to obtain a different type of high quality natural goatskin, targeted towards to bookbinding, restoration and later also used in the segment of architecture and interior designers (panel).

More recently, following a trend that was already ongoing in Europe, the company began to offer colorful parchments, in colors desired by customers.

In its first participation in LE CUIR A PARIS within the event of market trends, known as “Une Vision Pluriel,” the Exotica Pergaminho, won prominence as the only stand dedicated exclusively to the parchment (see press release site of Le Cuir Paris, September 2009). On occasion, we received requests from designers of the most important griffes known in the world.

Certainly, one can say that the interest aroused by these professionals, who always go in search of novelty and high quality products, took the direction of LE CUIR A PARIS, reserve a special space for the parchment in it´s 14-16 September 2010 edition.

Company Authorized and Certified by: